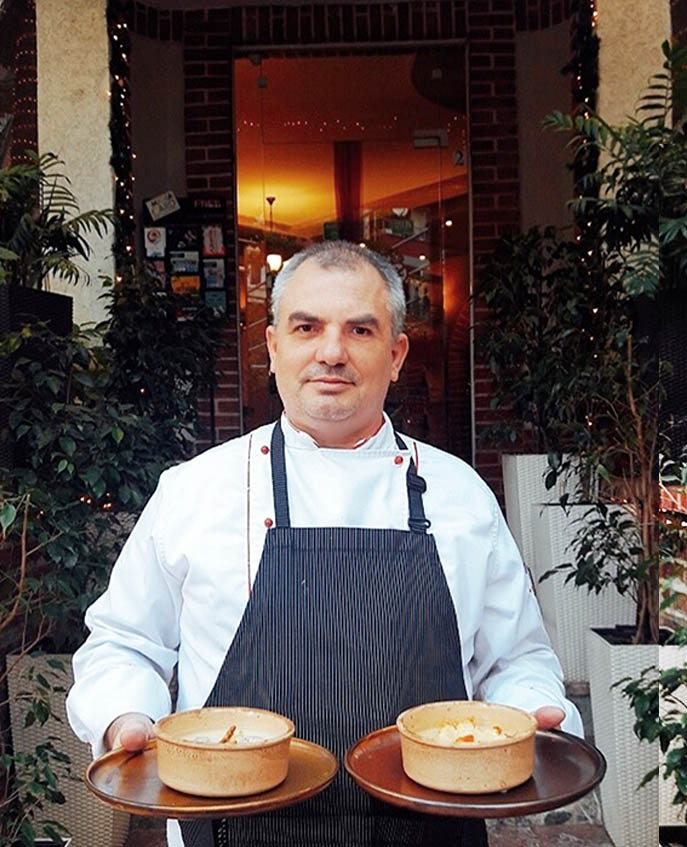 Chef Arti (Artemi Stefanidhi,) was born in 1971, in Përmet, Albania. He studied English Philosophy, at the University of Tirana.

During the transition period, Arti, like many other Albanians, left Albania. Arti settled down in Greece and began working as a dishwasher. The job , although difficult, connected him to the kitchen, and there began his passion for cooking.

It was 1994, when he was given his first opportunity, with a job as an assistant chef.With passion and determination, he gained knowledge and experience from Athens’ best chefs, improving himself more and more.The day came and he began to live his dream, working as a chef in the most famous restaurants in Greece such as: “La Strada“, “Kuklaqi“, “Wet“, “Alt Berlin“, etc.

With clear goals, experience and successes achieved, Chef Arti, returns in November 2002 in Albania, to open his restaurant, on March 1, 2003.

Based on his tradition, passion and tendencies, Arti positioned the restaurant in a ‘traditional-Mediterranean’ way.The dishes of the new restaurant were a novelty for Tirana and from that time until now the restaurant continues to offer flavors full of pleasant surprises for both local and foreign customers.
The name of the restaurant, Floga, is not random. It relates to the time when Arti worked in one of the most famous restaurants in Greece. At that time the Olympic Games were taking place in Athens and along with the tradition of passing the Olympic Flame, called Floga, the preparation and cooking in restaurants followed this relay, where according to the place that took the Flame (Olympic Flame) the cooks prepared dishes with this place’s menu. Arti decided to become part of this ancient tradition, with a special menu and service to give the “Floga taste”.
This vision is the guide and destination for Chef Arti with his restaurant, Floga.
× WhatsApp Chat